Do You Want A Vinegar Weed Killer Recipe?
Take Your Pick... Make Your Own... Or Think Twice?

Everyone has weeds. Many have heard that you can use vinegar as an herbicide to get rid of them. Is it true you wonder? How do you use it?

Yes, it is a fact that you can kill weeds with vinegar. That sounds great, doesn’t it! People hate to spend money for a product to get rid of weeds, and vinegar is cheap. Many people would like to avoid chemical sprays, and vinegar is all natural. Sounds like the best of both worlds.

Except….. there are a few exceptions, limitations, & details, that you should know about before you grab a bottle of vinegar off the shelf and seek revenge on those weeds.

FACTS ABOUT VINEGAR
AND WHAT IT CAN DO 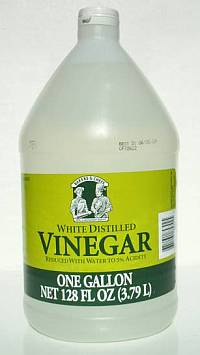 Vinegar is a natural product, usually derived from grain, apples or grapes. It is distilled through a fermentation process. The vinegar you buy is typically labeled at 5% acidity. This means it contains 5% acetic acid, the active ingredient.

It is fast. Spraying full strength vinegar on a plant in full sun will often result in a withered, brown plant in only a few hours, for sensitive weeds, or by the next day in tougher plants.

It is non-selective, meaning it might kill everything it touches. This limits the usefulness of a vinegar weed killer, to the extent that you are able to control over-spray that would get on desirable plants.

Do you have places where you could use these characteristics of a vinegar weed killer? If it seems like a good idea, how do you use it? That brings up an interesting development.

We don’t know whose Grandma started it, or how. It may have been an accident when she tossed out a bad batch of apple cider! The idea has been around a long time. But through the years, there have been quite a few variations for making a vinegar weed killer.

Searching the internet and other sources for home made remedies comes up with a wide range of formulas that appear to have originated from one basic recipe. Look at this simple chart to see the range of suggestions you can find.

What do you think? Do you want to try them all?

The differences in concentration for each ingredient, and the combination of mixes, make you wonder! Are any of them a good idea?

If you would like to know exactly what these different ingredients do, you must read WHAT TO EXPECT FROM HOMEMADE WEED KILLER.

A few of the critical cautions mentioned will help you narrow down this list of recipes for vinegar weed killer.

Some of the combinations seemed too weak and probably wouldn’t work, while others were too wacky to even try. I decided to try the last two on the list, to find out what full strength vinegar as a weed killer could accomplish.

I have plenty of weeds in one area of my yard that is not landscaped, so I did not have to worry about over-spray that might kill good plants.

Using ONLY FULL STRENGTH VINEGAR As A Weed Killer

I used a small sprayer, 1 ½ quart size, that pumps up pressure. This puts out a smaller, softer spray pattern than my larger tank sprayer. It allowed me to confine the spray to the desired area much better.

I also sprayed some weeds in ground cover and had a little bit of overspray. The ground cover died where it was hit, but it is the spreading kind and has filled back in.

The conclusion appears to be that a vinegar weed killer can be effective on some weeds, in some situations. However, consider the following information before you decide to try it.

Vinegar will NOT move through the plant to kill the root, like some chemical sprays will do. The root may die anyway, depending on the variety of weed, and how mature it is. Young weeds may not have sufficient reserves to put out new growth. The older weeds that grow back would be weaker, and many should die with a repeat application of the vinegar weed killer.

Some plants are not as susceptible to vinegar. A waxy coating or a “hairy” (fuzzy) surface may interfere with the absorption of the vinegar. This is the type that would suffer more by adding the soap to a vinegar weed killer recipe.

Vinegar applied to the soil as a full strength drench could kill the root directly. This is not recommended, since roots from good plants could also be affected. Also, the effects on soil microorganisms is unclear. They might die, or move out of the area, or become inactive temporarily. This would reduce soil fertility.

Vinegar would lower the pH of the soil, making it more acidic. This could be good if your soil is alkaline, not so good if it is already acidic. Yet, it is unlikely that the small amount used would cause much variation.

Anyone desiring to use a vinegar weed killer should be aware that the results they get will be quite unpredictable. It would be wise to try sampling before using any formula on a broad scale.

Vinegar weed killer can be found in a few products made by garden suppliers, but they have to meet certain regulatory guidelines before they can recommend using vinegar as an herbicide. This is for consumer protection.

These commercial products frequently add various additional ingredients, like citrus oil or clove oil, with the expectation that the mixture will make it work faster, or broaden the effectiveness to kill a wider range of weeds, or make the damage more permanent.

It may accomplish that, or it may simply set apart one product from another for marketing purposes. I plan to have some comparative testing done on several of these products later this spring. Check back later for an update.

Don’t blindly accept the recommendation of anyone on the internet, or other sources, saying vinegar weed killer is safe, natural and effective.
It might be in some situations, but not in others, it all depends. There are so many variables.

Use your best judgment. You've learned here the basic factors that should help you decide if it is a good idea to use a vinegar weed killer in your situation.

A number of sources on the internet have begun to suggest the use of a stronger version of this homemade weed formula, usually in blogs and forums. Is this a good idea?

Gardeners have contacted me inquiring about finding and using a more concentrated vinegar weed killer. It is possible to obtain vinegar in a 10% or 20% concentration, though these are not commonly found at domestic retail outlets.

Caution: be extremely careful if you intend to use this harsh product. The fact that it is still called vinegar can lull you into a misguided complacency, thinking it is a mild, natural solvent.

Remember, this is an acid, and you need to treat it with respect, the same as with other caustic substances like pool cleaners.

I was quite careful while handling the product, until the very end after cleaning up. Unknowingly, I had spilled over the edge of the bottle and got some of the full strength liquid on one hand.
Very quickly I started feeling a burning sensation. I immediately rinsed off the acid, but the damage was done. My skin had burn marks on the affected area, as if I had grabbed a hot bar-b-que grill.

I tried the 20% acetic acid and found the results favorable at killing some of the weeds which were resistant to the common formula mentioned above. These were larger, more mature weeds, of different varieties. They responded quite quickly to the spray and did not grow back.

Noteworthy is that it was an extremely hot day, which contributed to the impact of being a desiccant to thoroughly dehydrate the weed.
Also realize that the stage of growth can affect a plant's regenerative properties. These weeds were already forming seed-heads. Sometimes when a plant has invested its energy into forming seeds, it is unable to recuperate after being harmed. This varies from species to species, so your results may vary.

Wear a good quality nitrile or rubber glove or some type that is resistant to chemicals -- and be careful. It would also be smart to wear safety goggles and a mask to interrupt any vapors. This may seem silly to some  of you macho types, but you never know when something might splash, plus some people will be more sensitive than others.

Highly concentrated vinegar has now become commonly sold as a commercial cleaning product for indoor & outdoor use. Available in 20% and 30% concentrations, they are being promoted as the greatest cleaning product since soap for your most of your home & garden tasks, including making concrete paving and bricks look brand new after spraying off the crud of dirt, algae and old age.

Think about that. It's what you would expect from an acid. People are aware of muriatic acid being used in pool cleaning, toilet products and other heavy duty cleaning applications, like on concrete and masonry. It is always sold with "CORROSIVE" warning labels, and people hopefully use it with caution and respect.

However, these new high concentrations of vinegar as cleaners, being used full strength, are being sold with a minimum of notice on the label about potential hazards if used incorrectly or inappropriately.

While I find that irresponsible on the part of the manufacturers and the EPA and other regulatory agencies, (to overlook the potential hazards) I am not suggesting you should not make good use of these products.

Just be EXTRA CAREFUL, and treat it with respect, including rubber gloves, & protective eyewear in case of splashes. Be prepared to quickly rinse off any that you get on your skin or clothes. Keep kids and pets away from areas that will be wet with spray. Remember that any overspray onto any vegetation area, like flower beds or lawns, has the potential to kill, either temporarily or permanently.

If you are of a mindset to take this approach and try the stronger vinegar solution, here are samples of the 20% and 30% gallon sizes from reputable manufacturers of various household and garden products.

Note that these are typically used at full strength, unlike the concentrated version of chemical lawn and garden products that are diluted with water before spraying.

Also note that the coverage of a one gallon bottle at full strength is going to be limited. Most common garden sprayers will cover at most 1,000 sq. ft. of a flat area (probably less) with a gallon of liquid, so consider that into the overall planning of your project before you go this route.

What To Expect From A Home Made Weed Killer.

Go to Top of Page