A Guide To Using Gopher Poisons

When Should You Use Gopher Poisons?
Learn if they are the best option for you, or might be the worst!

Gophers won’t go away on their own. If you have plants, they have a reason to stay. They are not content to coexist with you. They rule their range. Their eating is destructive. They keep on digging.

A gopher presence anywhere is a nuisance. In a lawn, it’s a disaster. Do you need help controlling them?

Gopher poisons are very effective. Many people consider them a more convenient control method than trapping.
Poison can provide long term residual control. Bait that is not found or eaten immediately may still be potent at a later date when the next batch of gophers comes along.

This ease of use and effectiveness must be contrasted with safety concerns regarding the use of poison for gopher killing.
Evaluate the information in this entire article on choosing and using gopher poisons before you try it.

How do you know if gopher poisons or bait works? You won’t usually see a dead gopher. The only way you discover your success rate is by not seeing any new gopher activity (until the next varmint moves in).

They usually stay and die in their tunnel or burrow, which is the preferred result. Gopher poisons could cause secondary poisoning of a predator animal which picked up the carcass.

The most effective type of gopher poison, Strychnine, was once the most common. It is difficult to find from retail sources now, and many people welcome its demise. Yet there are appropriate places to use strychnine, nasty as it seems.

It is typically applied as a coating on different types of seed grains. You might think that would deter a gopher from eating it. But grain seems to be a delicacy for them. It is not uncommon for them to relocate part of what they find in a tunnel into their storage burrow. This means a later generation of gophers will have a surprise in store for them.

This poison is very potent and lasts a long time. A hawk, owl, cat or dog could be sickened or die from any poison that is in the gopher's stomach or even in the muscle tissue.
Please take extra precautions to ensure that children and pets do not have access to these baits, before or after you dispense them. Strychnine is not selective. It kills pets every year, so be careful!

Consider also that while these gopher poisons may have minimal environmental impact in your landscape, being used in relatively small amounts, they are not recommended for use in the vicinity of your vegetable garden or near fruit trees.

Wilco places the strychnine on millet, which is a small grain that dispenses very easily through a probe, mentioned later in this article. The Wilco Type 1 bait cannot be sold in all states to homeowners.
If you need this, and are eligible to purchase it,
it comes in a 1 lb can Gopher Getter Type 1 Bait -

There are alternatives to strychnine. One choice is to select a gopher bait that uses zinc phosphide as the active ingredient. This chemical causes a toxic gas to be produced in the digestive tract of rodents. This gas enters their bloodstream and is deadly to them, but does not leave toxicity that causes secondary poisoning. A pet might get indigestion, but would not be threatened as with strychnine.

are more reasonable volumes to purchase if you regularly need to use this kind of gopher bait. Again, some states will not allow this to be sold to homeowners.

Pellet forms are typically ground up grains, held together by a binder. They may dissolve in moist soil, meaning they won’t offer long term residual control like grains.) If you determine that the gopher does not seem to eat this type as readily, try placing with the bait a small amount of oatmeal or raisins to tempt them.

CAUTION: if you follow this tip, don't leave any of this mixture laying around. It would be very appealing to children (looks like cereal or granola) and also to pets!
Remember to treat this as a serious poison and take no chances! Some manufacturers used to mix raisins with their poison bait, and had to stop the practice because of the danger for accidental poisoning. BE CAREFUL!

ZP is also placed on some bait grains, like this one using cracked corn. Roxide Revenge Gopher and Mole Bait 1lb

It is very appealing to the gophers, but this larger grain may not pass as easily through some dispenser probes.

Mouse and Rat Bait for Gophers?

Some people ask if mouse or rat bait can be used to kill gophers. The official answer is that all chemicals should always be used according to the manufacturer’s labeled instructions. If it doesn’t give application instructions for a particular usage, then they may not have tested the product to determine the effectiveness or appropriate dosage.

What are the active ingredients of rat and mouse bait?
Two common types used are diphacinone and bromadiolone. These are anti-coagulants, or blood thinners.
Any rodent eating these doesn’t die immediately, but they die. Depending on the product, they may get a lethal dose in one feeding, or they may have to consume it over a period of several days.
The gopher may not eat a sufficient amount within a certain time frame for this to work.

Secondary poisoning is usually avoided with this group of chemicals. This makes it safer to use. Research done by agricultural institutions has observed effective control of gophers with such products. However, the type of bait that is desirable to rats and mice may not be as palatable to gophers. This could vary depending on what food sources they have available to them.

Update, Feb, 2011: There are now some products labeled for gopher use, with diaphacinone, for example JT Eaton Answer Gopher Bait consists of small blocks, virtually the same as the rat bait many people have used.

How To Use Gopher Poisons

Gopher poisons are typically found in the form of a whole grain bait that is coated with the poison. Common baits are either a long seed grain like barley or oats, or a round seed like millet. The only key difference between these is that the round seed may release more easily if you are using a dispensing tool. This tool deposits the bait in the gopher tunnel. Long grain seed may get stuck in dispensers with small openings.

if you have a large area to protect or if you tend to procrastinate on this chore because it is a nuisance. A dispenser probe isn’t essential, but it does make the task a bit easier and will avoid dangerous spills.

If you don’t use a dispenser tool, you must have a way to get the bait into the main tunnel. An exit tunnel leads from the mound of dirt above ground to the main tunnel below.
This exit tunnel is not usually the best place to put gopher poisons. You rarely see this as an open tunnel, since the gopher will plug it as soon as he finishes pushing dirt to the surface. Occasionally the plug is obvious and can be scooped out with a spoon or other tool.

If you discover an exit hole in active use, you could just pour some bait down the hole, but this leaves it exposed to pets, and it will likely just get buried as the gopher pushes out the next batch of dirt. So try to deposit gopher poisons in the main runway.
Tape a plastic spoon to a stick and use this to place the bait deep into the tunnel. One spoonful is plenty for each application point.

What if the tunnel is not exposed? The main tunnel can be found by using a metal rod like a long screwdriver. A thin but sturdy stick may work if the ground is soft enough.
Poke the rod in the ground to a depth of 4” to 8” and when it enters the tunnel, the lack of resistance will make it obvious that you found the tunnel. A gopher hole or tunnel will be about 2” in diameter.

TIP: the tunnel is usually found NOT directly under the mound of dirt. 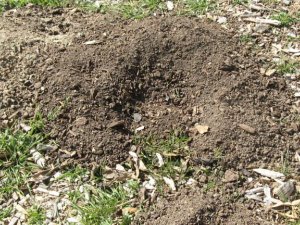 Look at a fresh gopher mound. It is crescent shaped, and appears more flat on the one side where the hole emerged. The outer crescent is evenly rounded from the dirt being pushed out over the top of the mound.
In this photo, imagine the gopher moving from the bottom edge, up a sloped ramp until he exits the ground at the hole in the middle, and he pushes the dirt ahead of him towards the photo top.

Push your rod in the ground starting near the edge of the mound and again every inch or two beyond, until you feel the open tunnel. Poke a couple more holes close to this spot to make sure it is an open tunnel, and not just soft dirt in the latest excavation.
This will take some practice, but after you do it a few times, you'll be able to feel when you release into the main tunnel. The depth is usually about 3-8 inches below ground.

Withdraw your probe and you should be able to pour the gopher poison down this hole into the tunnel. Enlarge the hole with the rod if necessary. A small funnel can be helpful to keep the poison bait from falling out on top of the ground. If you don’t have a funnel, roll a piece of paper into the shape of a snow-cone tube with a hole open on the bottom.

Once you place the bait in the hole, avoid knocking loose dirt on top and burying the poison. You can leave this small hole open, but it is best to plug it with a stick, rock, dirt clod, grass or leaves. Don’t bury the bait as you do this.

Note: A dispenser probe may be damaged by forcing it into hard soil. Use a steel rod to first locate the tunnel and make a pilot hole. If the ground is quite hard, it may be difficult to push even a steel rod down deep enough to find the tunnel. In this case, either soak the area first with a sprinkler, or just dig with a shovel to find the main runway.

Safety with gopher poisons or bait is always a concern.

Choose and Use Wisely

Using gopher poisons is an effective way to control these pests. If gopher traps are not practical for your situation, then poison bait may be your best option.

Elimination of gophers is always temporary. More gophers can move into your area and use the existing tunnel network. Be alert to new activity.

At the first sign of new digging from gophers, spring into action with your traps or gopher poisons! Eliminate them before they reproduce. This is your best chance for successful control with a minimum amount of headache.